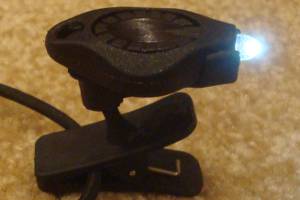 A headlamp is a great outdoors tool. It frees up both hands, lights your way or work area, and is convenient. I've got a few different ones (one I even found ontrail at Philmont) that have evolved from incandescent bulbs to LEDs, reducing the weight and power usage. But, I just got a way cool upgrade.

I received a Photon Freedom LED light. It is a single LED but is dimmable so I can choose the brightness, and corresponding power consumption. I can't show you how bright it really is, but this tiny light delivers as much light as my previous 4 LED headlamp.
It weighs just 0.25 ounces and is as bright as my 7.6 ounce headlamp. When I add the clip, it weighs 0.4 ounces. To reduce weight, I removed the keyring, cut the tiny magnets off the clip, and left the lanyard on the table.

I'm impressed (it has a big 'fun factor') and am very excited to use it on my long hikes. I don't expect to do any night hiking, instead using it for a camp light. The clip allows the light to swivel around into any position, and is tight enough to hold it in position. 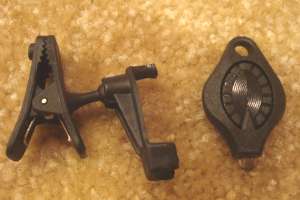 This one light should last for at least a month of hiking, but I ordered a bunch of CR2016 batteries for cheap online and will take a few, just in case. It's supposed to last from 12 to 50 hours, depending on the brightness I use. Since I expect to be in my shelter right after nightfall each day, I don't think I'll put many hours on it.

I'd prefer rechargeable batteries and Photon has a version that can be recharged. There's also a solar charger accessory which could be useful, but may weigh more than carrying a few extra batteries.

I also received an ultraviolet version from my brother, concerned about scorpions on my Arizona Trail hike - he figured I could use it to see them before stepping outside or into by shoes. :-) For the extra .25 ounces, I'll probably take it along - who knows what I'll find with it.