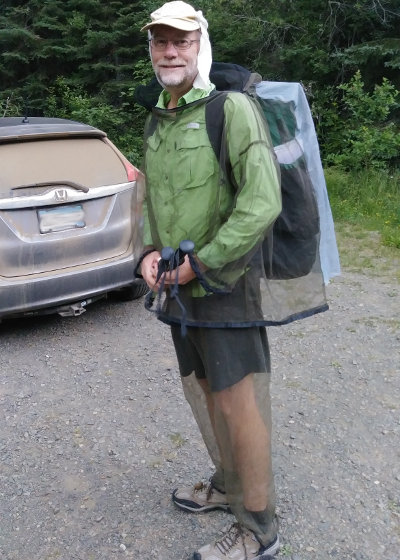 My recent Superior Hiking Trail hike was short in days, but long in miles. Along the way, I had some thoughts that I figured I should share. Some of them might just make your SHT experience a bit better. 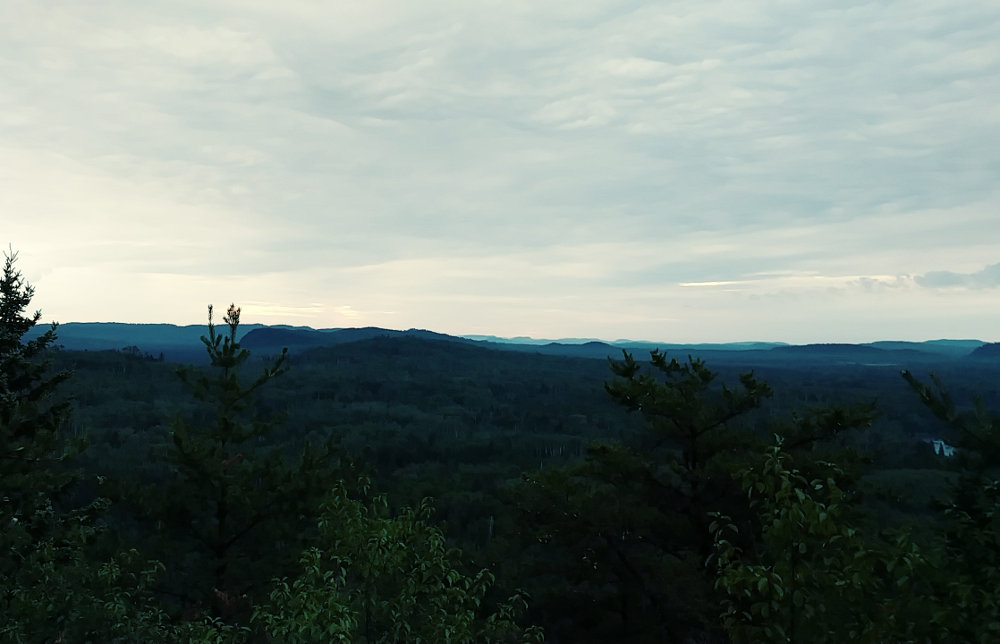 I thought I was prepared. Really, I thought I had all the bases covered.


The one thing I did not prepare for was to catch a stupid common cold! Seriously, catching a cold out on the trail? Well, that's what stopped my fast hike of the trail.
Here's a quick overview of my 92 miles in 2 days and 9 hours SoBo (SouthBound) hike.

Mrs. Dude dropped me off at the Border Route Trail trailhead on Otter Lake Road at 5:50am. It was too buggy for her to walk up to the northern terminus, so she drove off as I hiked north a bit over a mile to the official SHT Ending/Starting point. Very nice views there, with a trail registry. It was cool to see that a few other SoBo hikers had started over the past couple days. I had high hopes to find them along the trail over the next week. I hope they are all having great treks and progressing towards their goals right now.

The trail was dry and in good shape, even at the far northern end. No more than an hour after starting south, it started sprinkling. It felt good at first, but after an hour or so, my shoes and socks were soaked and I finally decided to toss on the rain poncho since the sprinkles were turning to real rain.
Soon after that, I crossed paths with my first two fellow hikers. To my surprise, I knew one of them! He is the owner of Campfire Dragon and a Leave No Trace educator. These guys were just finishing up a ~55 mile trip from Grand Marais to the north end.

The rain eventually let up, leaving soaked foliage along the trail. That meant mile after mile of shoes not drying out since every step replaced any lost water in my shoes. Much of the trail was overgrown, but that was expected up here. I needed no navigation because it was well blazed and a dent in the weeds could always be noticable.

A short break for water and a bit of food at South Carlson Pond campsite halfway through the day, and I was back to hiking.

I stopped for water again from the Brule River just north of Devil's Kettle Falls which was a mistake. Better planning and I could have just filled up from the clean spigot at the Magney State Park parking lot, saving 10 minutes of filtering.

I ended the day at 6:45pm at the South Little Brule River campsite. I had hoped to make it another 5.3 miles to the Kadunce River site, but the wetness had been a drain and I was spent with only about 2 hours of light left. I had passed the Northwest and North Little Brule River sites because there was no one in them and the South site was farther down the trail. I think it would be better to stop at one of the first two since they looke like much flatter and spacious sites.
Fortunately, there was a family already in camp so I got to chat with them for an hour or so. The dad had lots of questions about my gear and hiking, so it was fun, even though a bit more rain fell in the evening.

Rain from the night left the trail wet again in the morning. So, wet shoes and socks left over from yesterday went right back on and stayed wet until the shoes eventually dried out in the afternoon - the socks stayed wet.

I was awake before my alarm went off, feeling like I had not slept much through the night. A quick packing up and I was on the trail by 5:15 with just enough light to not trip and fall. Yesterday, I had passed the highest point in the trail and just a mile down the trail I would pass the lowest point, doing the LakeWalk. It's a slow, plodding 1.5 miles on a smooth gravel beach that is beautiful but tiring. Here's a tip: walk on the largest stones - they offer a bit more support than the pebbles.

Filtered water from Cliff Creek around 9am.
Ran into a group of girls from Camp Manitowash at the Woods Creek trailhead, taking a break.
Filtered water at East Devil Track camp.
Spent way too long at Grand Marais overlook at midday.

I think a wonderful Fall dayhike would be from the Woods Creek trailhead to the Pincushion Mt. overlook. The trail is mostly clear and there are waterfalls, cliffs, many tree varieties, and a great view over Lake Superior. It's about 8 miles long.

I filtered water at South Bally Creek Pond camp. Another short time loss since it is quite a way offtrail - getting water at North Bally would save time.

Hit my most frustrating event on the trek at the Cascade River. The SHT runs down both the east and west sides of the river. The main trail is on west side so I followed signs over the bridge to a blue blaze on a big tree with a trail leading down the hill. It quickly peetered out into down trees from wind. I followed tracks made by others searching for the trail until they all disappeared. After 15 minutes, I gave up, crossed back over the bridge and took the Spur Trail down to Trout Creek camp. I still don't know where the 'main trail' is to be found there but I expect it requires a more significant roadwalk west from the bridge.

Trout Creek is a nice site. Tons of flat space under huge trees and easy water access. Having arrived at 8:30, I set up camp, got water from the river, and went to bed. And, that's when I noticed the left side of my throat was scratchy and my left nostril was dripping a bit.

Another fairly restless night, but no rain. I woke at 4:45 and was concerned with my worsening cold symptoms. Nothing I could do about it, and I was still good enough to hike. I took quite awhile to pack up, filter water, eat a little, and contemplate if I had a shot at the record. The first two nights, I stayed at the same sites as the current record, the trail was dry, weather was looking good, and my legs were doing much better than I had hoped for. So, with finally dry shoes and a new pair of soft, dry socks, I got on trail around 5:45. Never did see sign of my neighbors at this site, but I hope they enjoyed their adventure.

The morning flew past. I made great time on nice trail to Agnes Lake where I filtered water. The entire time, my nose dripped - about every 20 to 30 seconds, so I was losing more fluid in addition to sweating. And, I would have a horrendous sneeze/cough every 15 minutes or so - probably why I saw no moose or bear. But, it was still just a runny nose and sore throat - no congestion or difficulty breathing yet.

At a road crossing just before Lake Agnes, I met two guys by a pickup. I stopped to chat and found out they were waiting for a Boy Scout troop following me down the trail. They were supporting them with food, water, whatever was needed. The troop was at Indian Creek camp, but I told them there was no sign of life when I hiked past at about 7am so they might be waiting awhile. Turns out that this was Troop 228 from Philadelphi, PA that had sign the Northern Terminus registry on 07/16 so they had taken 6 days to get this far.

After Lake Agnes, I got yet another Poplar River overlook photo. I have 3 now. It's a beautiful view. But, at about this time, I noticed my head was starting to ache quite a bit and my runny nose was getting thicker. Not good. I had kept hoping it might just pass. When I started to have a little difficulty breathing and hacked up my first blob of mucus, I conceded that it must be a cold and would only get worse.

According to Mayo Clilnic, symptoms of a common cold usually appear one to three days after exposure to a cold-causing virus. Signs and symptoms, which can vary from person to person, might include:


I knew it would take at least a couple days to get over the worst of this cold. Normally, on a long hike, taking 2 or 3 'zero days' of no hiking to rest and repair will get you back on trail. But, since I had only 9 days to complete this, losing even a day meant I would not finish. So, I had the choice of finishing a full day of hiking at Temperance River S.P. or cutting it short at the next trailhead. Making it to Temperance would have put me on record track for 3 days, but would have meant a late night of driving for my wife. I took the spur trail to the top of Oberg Mountain to make the call and then waited until she picked me up at about 6pm.

A night in Duluth, drive home on Monday, and now it's Tuesday morning. The cold is running its course and I gained a fever and coughing and have no energy, so there's no way I could have kept up the hiking. I knew completing this fast hike was a stretch, but I sure did not expect the common cold to be my downfall. I wish I could pinpoint where I picked up the virus - it was probably at a gas station or food place on the drive to the trail since that was my only interaction with people for the 3-day incubation time.

I finished hiking for today. You can check out my current location on the map and I'll post about my day when I am in coverage.
Leave Comment
Posted: 07/21/2018
Something Interesting

I finished hiking for today. You can check out my current location on the map and I'll post about my day when I am in coverage.
2 comments     Leave Comment
Posted: 07/20/2018
Something Interesting

I saw something interesting at this spot.
Â
Â
Â
Â
Â
Leave Comment
Posted: 07/20/2018
Older Posts               Newer Posts
Site Disclosure Statement
Share
Tweet
Comments:
Feb 13, 2020 - Jason Berklund
Hey hiking dude I have several questions planning my first north to south trip from 270 all the way down. I kind a know what to wear what to eat all that important jive. I am in relatively good shape definitely Not concerned about where in tear. 45 years old going with a 21-year-old nephew. My question is I have friends in Duluth that I donât want to burden with driving me whatâs the best way to get up to otter Lake Road thatâs not gonna cost a crap ton. We were thinking 15 miles a day. We were also thinking hammocks. Let me know what you think please. I have read so much and look at so much and heard so many opinions but You seem to be very realistic on your comments. Thank you
Feb 13, 2020 - Hiking Dude
@Jason - Hammocks work fine - most campsites have lots of trees.   15MPD is realistic, and you'll probably do more than that many days.
Getting to the northern terminus is expensive (in my mind).  If you can schedule correctly, Arrowhead Transit is cheapest to Grand Marais, but then Harriet Quarles is the only shuttle I know of.  You might find a good ol' boy in Grand Marais willing to drive you the 35 miles to the end for a few $$$.
It's a 3 hour drive from Duluth - that's 6 hours and 300 miles round-trip.  Maybe your friend would like to drive up the north shore for a day.
Ask a Question