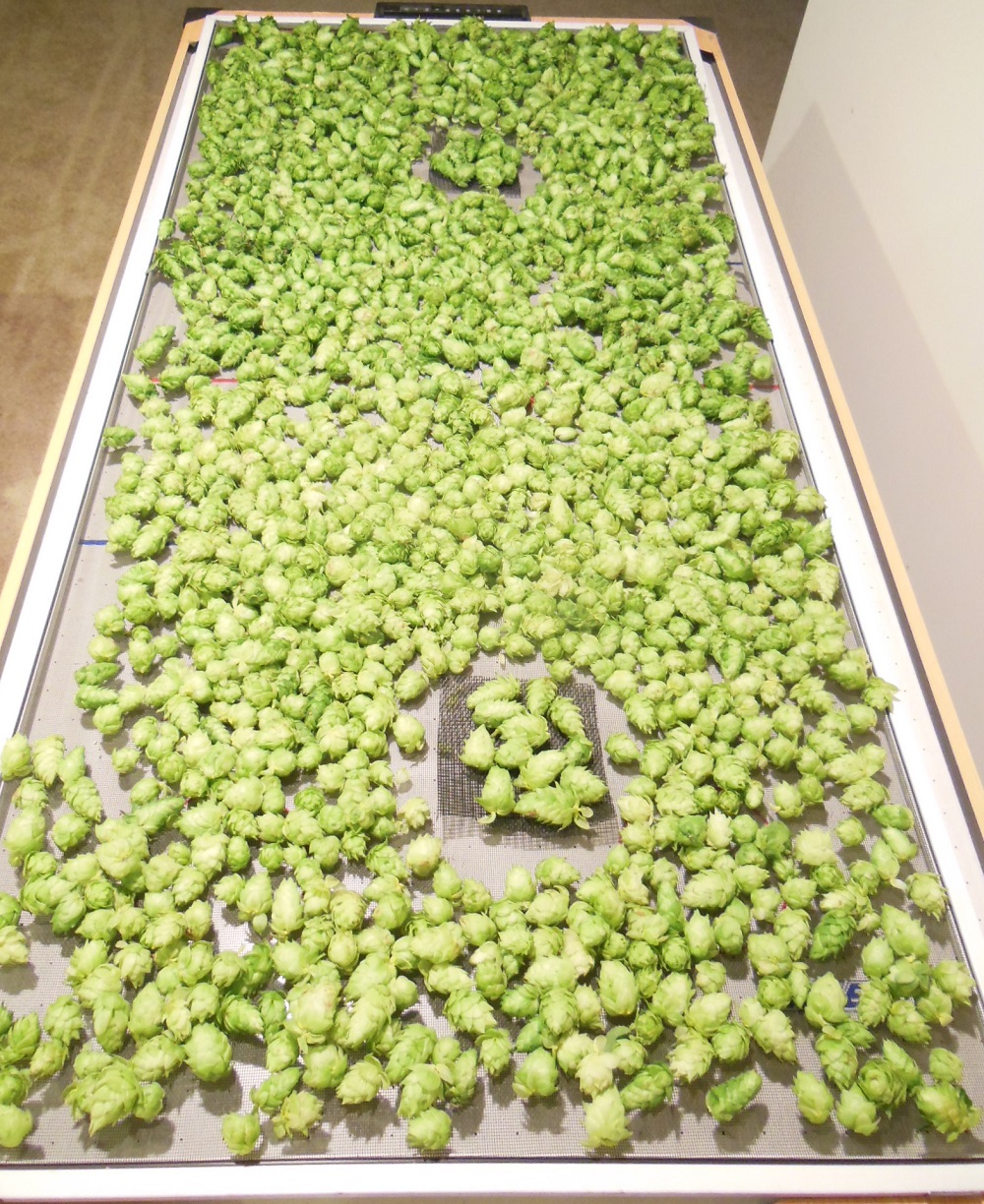 Besides hiking, I also homebrew beer. My wife wasn't using our very small garden plot this year, so I grew four hop plants just to see what would happen and today was the surprise harvest day. These are all the hops I harvested from my small garden. Tonight, they are laying on a screen on an old air hockey table where they will hopefully dry over the next day so I can use them in my next batch of beer.

In 5 short months, I've learned a ton about hop farming - and there's still tons and tons more I don't know, but that will make it fun to continue on learning. For example, just the terms are weird - a bine is a hop plant that normally would be called a vine, the hop plant that gets planted in the ground is called a rhizome, and the part you harvest is a cone. That screen has about 2 pounds of cones on it. 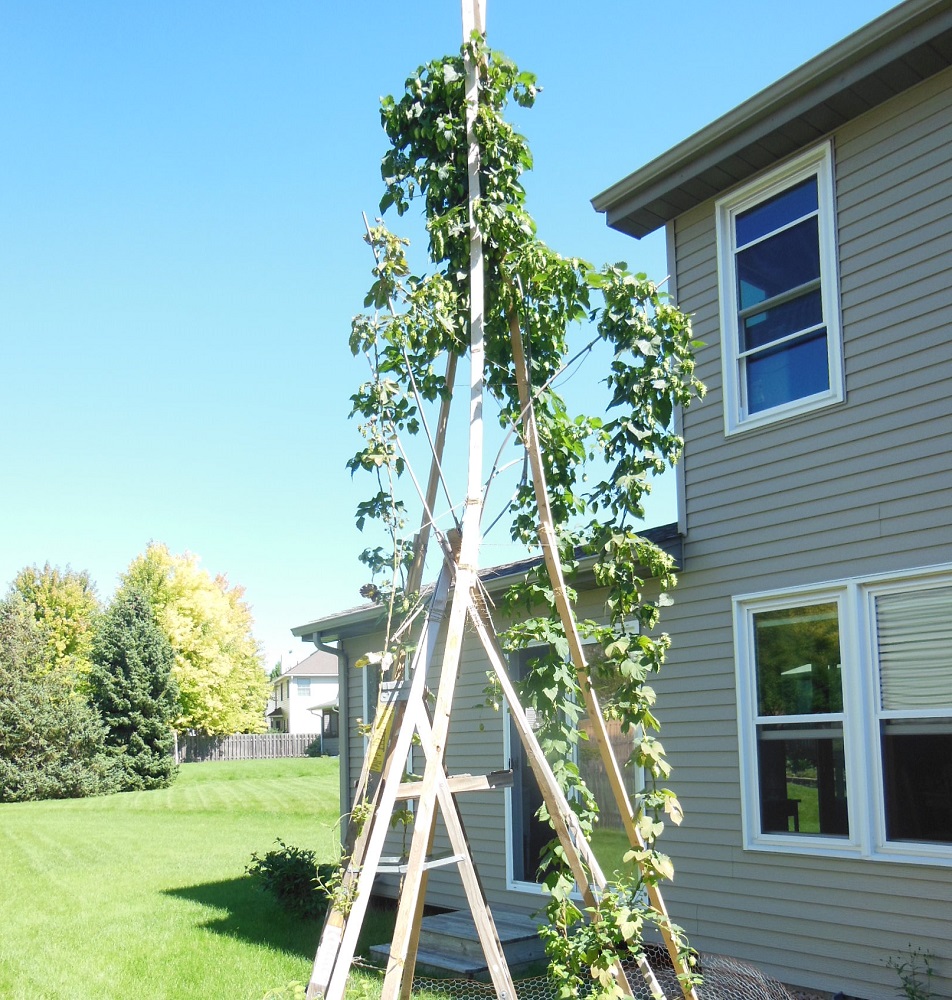 But, I want to let you know how I spent my last day with my hop farm.
I planted four rhizomes way back in April - two Cascade hops and two Nugget hops. I built a 7-foot pyramid trellis for them to climb and, as they quickly sprouted and reached towards the sun, they worked their way to the top. All four bines survived, grew, and were healthy. I kept their small area weed-free and life was good.

But, those bines wouldn't stop growing. I finally had to accept the fact that hops really do grow to 20 feet high. I lashed together a taller three-poled trellis and up they climbed. This is the final growth that I started harvesting today. The bines reached the top, wrapped around, and basically made a big knot of hops at the top. Hey, it was my first year and I just wanted to grow hops. 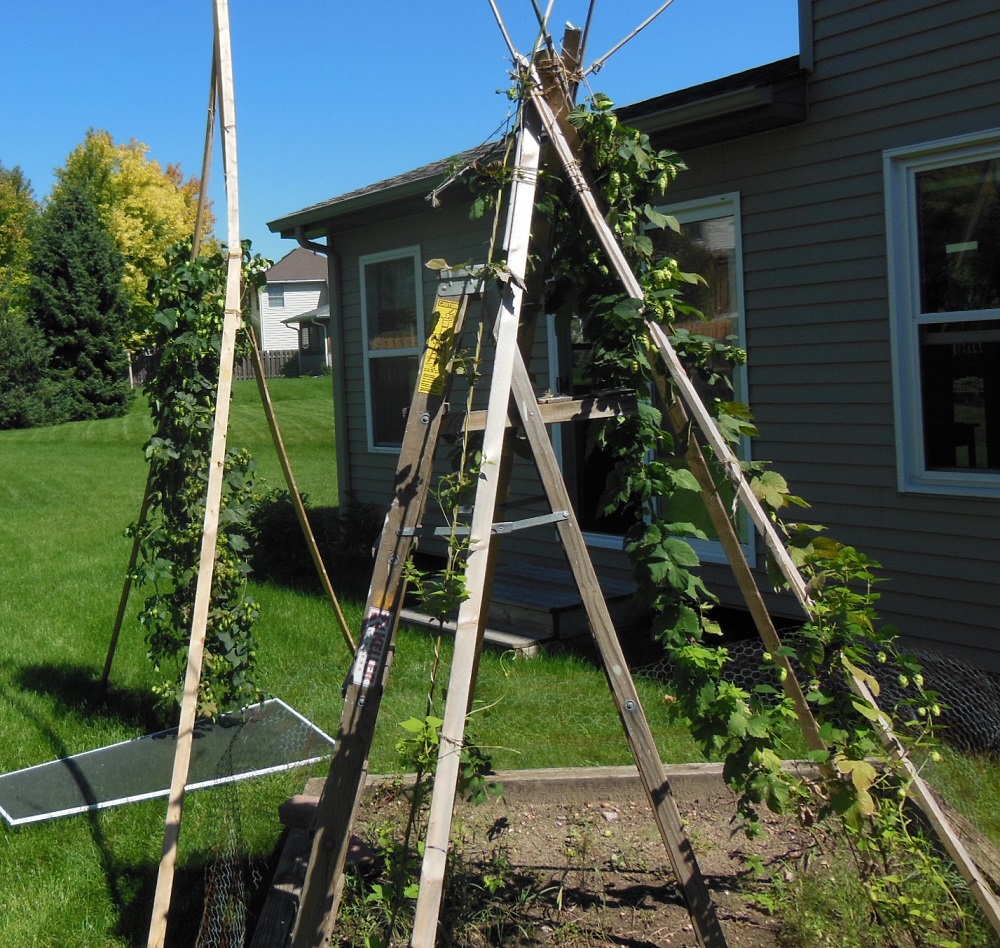 I found out today was harvest day because I tested a dozen cones to find their moisture content. If it's under abour 78%, it's time to harvest. I weighed them, then microwaved them to evaporate off all the moisture and weighed them again - moisture was only 70% so they were drying out and I didn't want them to go bad on the trellis.

Since they had grown so high, I cut all four bines about 6 feet up and lowered the upper section to the ground as you can see in this photo. I picked the cones off the remaining 6 feet and will let that part of the plant continue to grow until it naturally stops this fall. This should strengthen the root system so I can cut it back and then have it come back with vigor in the spring. 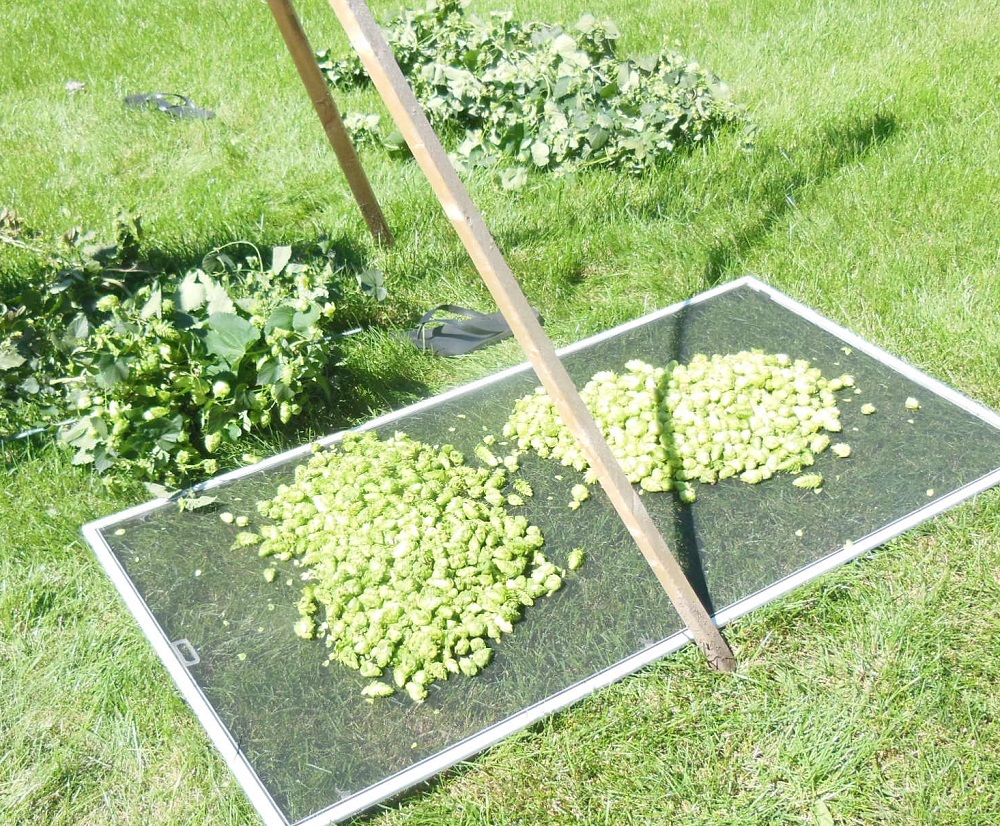 The next 60 to 90 minutes were pretty easy and monotonous, just plucking cones off the bines. The old window screen worked well to collect the cones and it was fun to watch my small piles slowly grow as my hands got slightly sticky from the hop oils and my arms itched from the hop fibers. They say to wear gloves and protective clothes, but I'm a noob this year.

I finally finished with two piles of cones, the bare bines in the compost bin, and a successful harvest. The funny thing is that a batch of beer uses somewhere around 4 oz. of hops - once these 2 pounds are dry, that's just about how much I'll have. A summer of growing for just one batch of home brew.
But, it was sooooo fun, entertaining, interesting, and educational to grow my own, and next year they should produce about twice as much. I'll have a better trellis to keep the hops separated and they will be more mature with a higher yield.