With the warming sun, our mountains of snow along the roads and trails become dirty and then gradually melt away. What they leave behind is like the receding glaciers - piles of debris that has built up over the short ice age from November thru February. Unlike glacial debris, what we find every March is trash (and too much dog poop) which doesn't belong there.

As long as I'm out there, I pick up what I can and recycle or dispose of it (but not the dog poop). I've found it's a little more interesting to make up a story about the trash I collect, so here's A Sad Story for you... 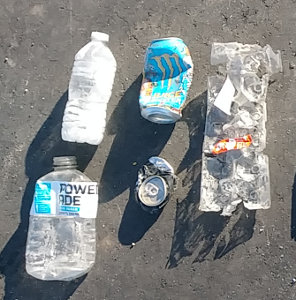 Once upon a time, a guy from Iowa got a call from friends in Minnesota. They said, 'Dude, let's party! Tonight!' So, he left work early, hopped in his car and headed north. He did a great job of staying hydrated by drinking water, Powerade, and a couple Monster fuels. Along the way, he got hungry so he stopped for a quick bite at Taco Bell. 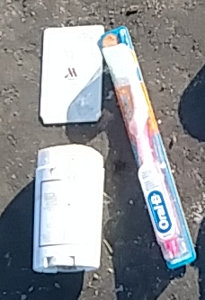 When he reached Minneapolis, he checked into the Marriot where he planned on crashing after a night of partying with his BFFs. He took a shower, put on deodorant, and brushed his teeth with a brand new toothbrush he bought when he stopped for gas earlier. Then, he headed out to meet the gang. 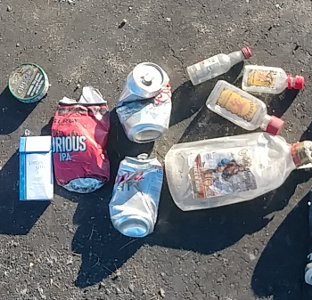 Man, oh man, what a party!!! They drank lots of beers, chewed a little tabacco, and smoked while they caught up on old times. After awhile, that got a little old as they got a little lit, so they moved up to the stronger stuff. Captain Morgan, Fireball, vokda, and whatever else they could find kept them hopping late into the night. Time flew by. 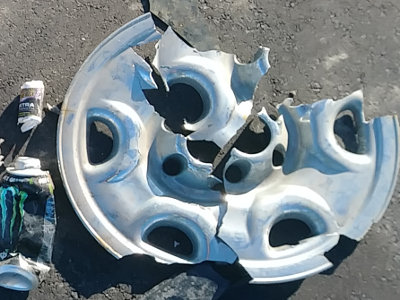 Just as the bars were closing, and he was looking for his Marriot's cardkey to go hit the hay, his phone rang. There was an emergency at work and, if he wanted to keep his job, he had to be at work before the sun came up in the morning! Being a loyal, but inebriated, employee he left his friends, hopped in his car and raced south.

As you might expect, all that alcohol caught up to him and he became drowsy. He slapped himself a few times and pulled into a gas station. There, he bought some Monster fuels and some Energy Extra shots to get him home. That worked for a few more miles, but not long enough.
Somewhere in the night, in the beautiful Iowa countryside, he finally fell asleep and drifted off the road where his car crashed into a herd of sleeping cows, tipping 23 of them over.

So Sad - almost as sad as finding this much trash along a 2-mile stretch of bike path. We are all grounds keepers so please trash your trash, leave no trace, and care for the planet.