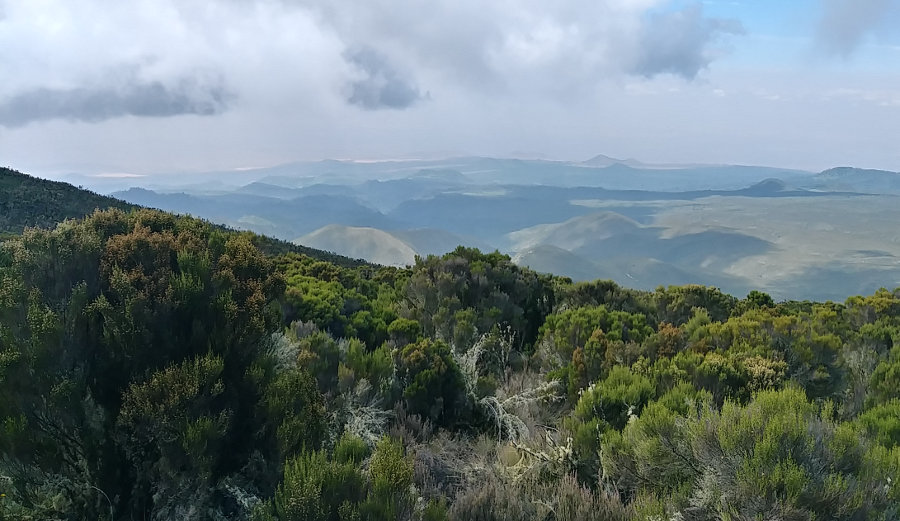 As it turns out, our group is very good at 'Pole Pole'. We have a guide leading the way and we are not supposed to get ahead of him - no one has yet. His job is to make sure we don't hike too fast. 'Pole Pole' is Swahili for 'Slowly' and that's how we're supposed to hike. This is by far the slowest hiking I have ever done. We aren't even at any elevation yet and we're going less than 1MPH. Oh yes, I would prefer to go faster but I was expecting a slow trek, so I'm fine with strolling along and enjoying the scenery.

And, the scenery really changed today! We climbed up the Shira Ridge out of the jungle into tall scrub bushes and open sun. As the brush became smaller and our elevation became higher, we had great vistas out to the north and west where we could see the forest we had just left behind. All the big trees stopped growing at a certain elevation. You could see an obvious contour line where the trees stopped all along the hillside - very cool. And, we got our first glimpses up the high slopes of Kilimanjaro. Besides summit day, this was the hardest hike of the trek because it was warm and humid and a good gain of elevation. It was only a couple miles, though. 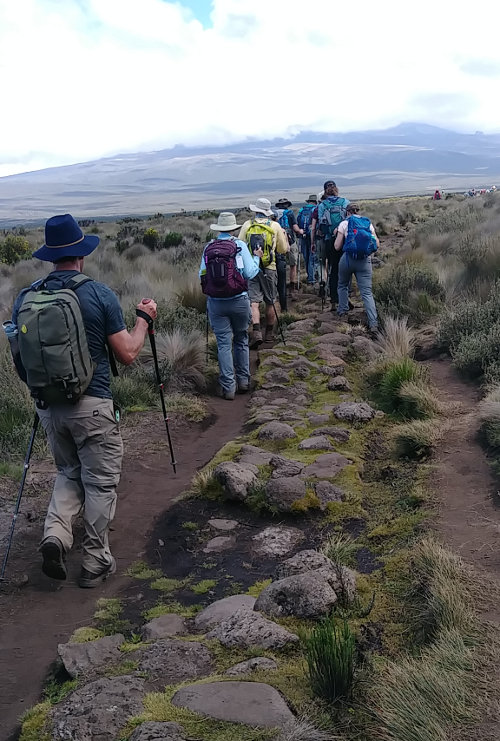 Reaching the upper end of the Shira Ridge, we traversed the Shira Plateau - a vast, relatively flat, plain reaching to the flanks of Mt. Kilimanjaro - to our campsite. So far, we've not actually been hiking on what most people think of as Kilimanjaro. The mountain has three volcanic cones: Kibo, the highest in the center at 19300 feet; Mawenzi, to the east at 17000 feet; and Shira to the west at only 13000 feet. Uhuru Peak is the top of Kibo and that is our destination but we've been walking up and along Shira the first 2 days. Tomorrow, we'll reach Kibo's slopes.

Across the plateau, as is true for the entire trek, the trail was obvious. Thousands of people a year tend to make a well-trodden path! But, for a half mile or so, the trail was constructed of large rocks arranged in a 3-foot wide path across the wilds. Some crew of workers put in a lot of time building it, but no one uses it. You can see in the photo that there are two well-worn dirt paths on either side but moss in the middle with the rocks. So, I guess another good idea that didn't pan out. Fortunately, it led us straight to Shira 1 Camp where we'll spend the night. 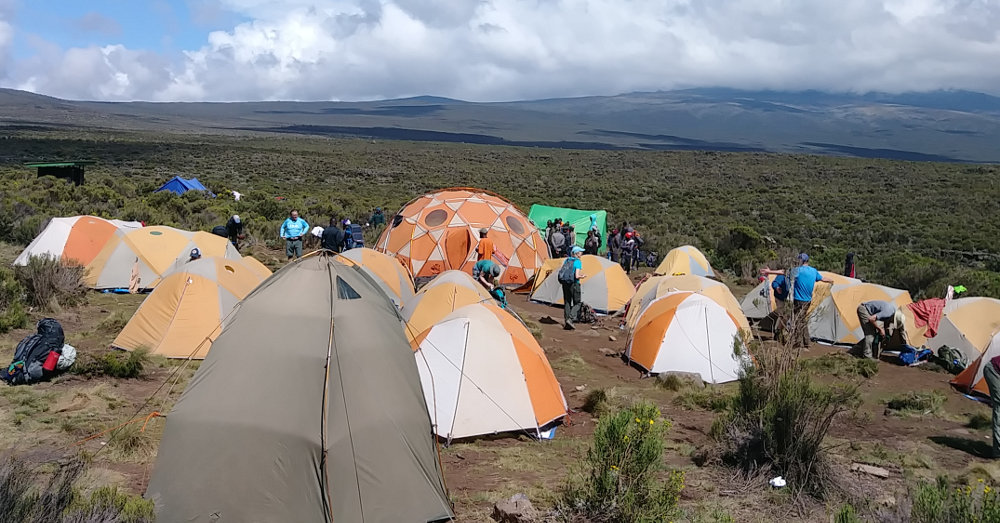 This second evening was absolutely the best camp of the trek. There was plenty of room and views all around, even up the slopes of Kibo. The big mountain was hiding above its blanket of clouds as it did every day from late morning until evening. As we waited patiently, the clouds gradually evaporated allowing glimpses of the peak before nightfall. It looked almost close enough to start climbing, but we'll not get that chance for four more days.

In this view of camp, you can see a portable toilet in the foreground and our large 'Thunder Dome' dinner tent dead center, behind which is the bright green kitchen tent. When we hike into camp, all of this is already set up every day! All we need to do is find tent #9, lay out our sleeping bags, change into camp shoes, and relax. Relaxing includes receiving a bowl of hot water to wash with, and then making coffee, tea, or cocoa in the Thunder Dome. It's a rough life! And, it's a strange feeling having others wait on me out here in the wild where I'm used to doing everything myself - I'm afraid I may get spoiled. 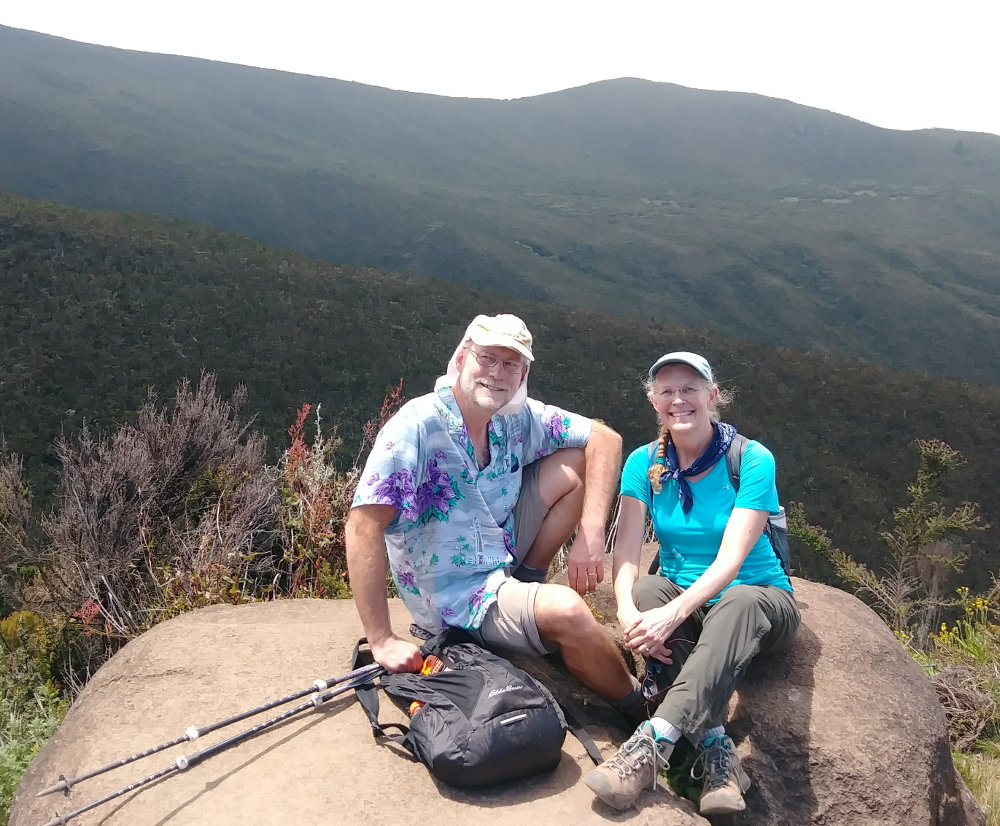 As you can see, my hiking attire on this trek isn't my usual drab, blend-in style. Since we're a big group, and there are multiple groups trekking, I figured something a little more vibrant might be interesting. It's totally not 'LNT', but there's no way to make a group of 100 people LNT, so I'm making it fun. I did notice on this and subsequent days that I tend to be more comfortable wearing a lot less than most others. The cooler temperatures felt nice to me while others put on gloves and fleece.