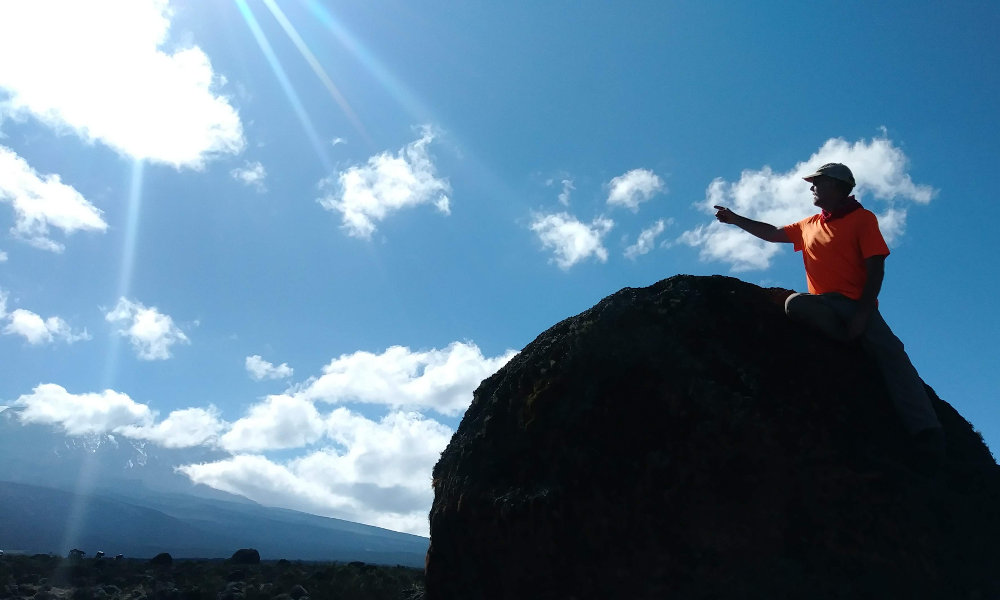 Somewhere out on the Shira Plains, we took a short snack break by this boulder - so I scrambled up and pointed the way to the summit! :-) Notice my attention-seeking shirt? I didn't want to get lost out here in the wilds of Africa!

From a crystal clear sunrise behind Kilimanjaro to the last rays of light bathing the summit, we had beautiful blue skies with the mountain showing off its crown of ice and snow. This was a wonderful day of walking with no hurry and plenty to see. After yesterday being the hardest hike, today was the nicest hike of the entire trek.

I woke before the sun today after a wonderful, warm night of sleep. Kili rose in the northeast with a bright star directly above it, but I couldn't get a good photo. So, I waited and watched in my down jacket and warm cap as the sun ever so slowly brightened the eastern sky behind the mountain. It was a peaceful half hour all to myself until the rest of the camp woke to the new day.

We've been given something of a schedule now. The support crew wakes and gets busy at 5am, starting on breakfast, making coffee and hot water for tea or cocoa. At around 6am or so, a couple guys come to each tent with a pot of hot, real coffee for whoever wants it. Since I don't drink coffee, I've spent this time out alone looking over the land, but others in our group love the wake up ritual. At about 6:45, we get hot water for washing, then breakfast is served around 7 or 7:15. Again, all we have to do is show up and eat - tough job! These guys making breakfast are the same ones that were up well after dark cleaning dinner dishes after making us a full meal the night before. 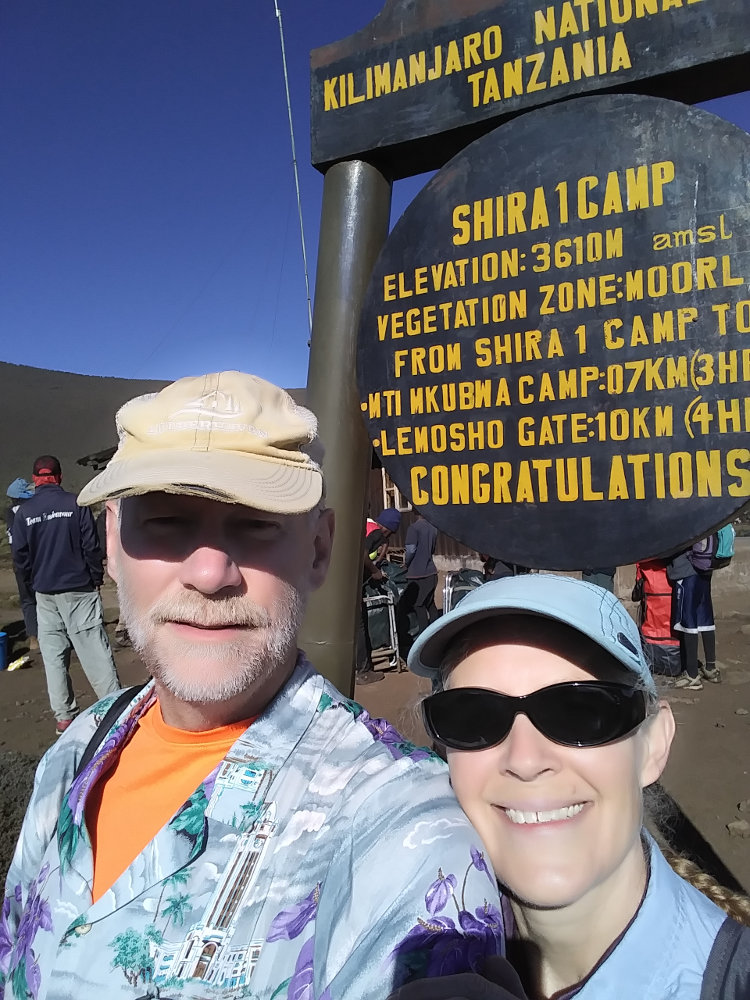 We're ready to start the day's hike once the sun warms us up. From down jacket to Hawaiian shirt by 8:30am, and it's time to start walking. Today, we gain 1300 feet, but it's a long, gradual gain throughout the day with a bit of a climb at the end.

Giving way to passing porters throughout the morning, our gang snaked its way across the plains. Nearly all brush has given way to grasses and occasional bushes. Distance is more difficult to measure and the miles slide past our feet. The highlight of the day is a sidetrip to Cathedral Point which you can see on the map track of our trip.

Reaching the far southeast edge of the Shira Plateau, a rocky ridge rose before us, but the main mountain was to our northeast. This ridge was actually part of the rim of the huge caldera we spent the past day hiking through. Of course, we had to climb up it to see what was on the other side. Actually, our guide told us to climb and we're good rule followers! 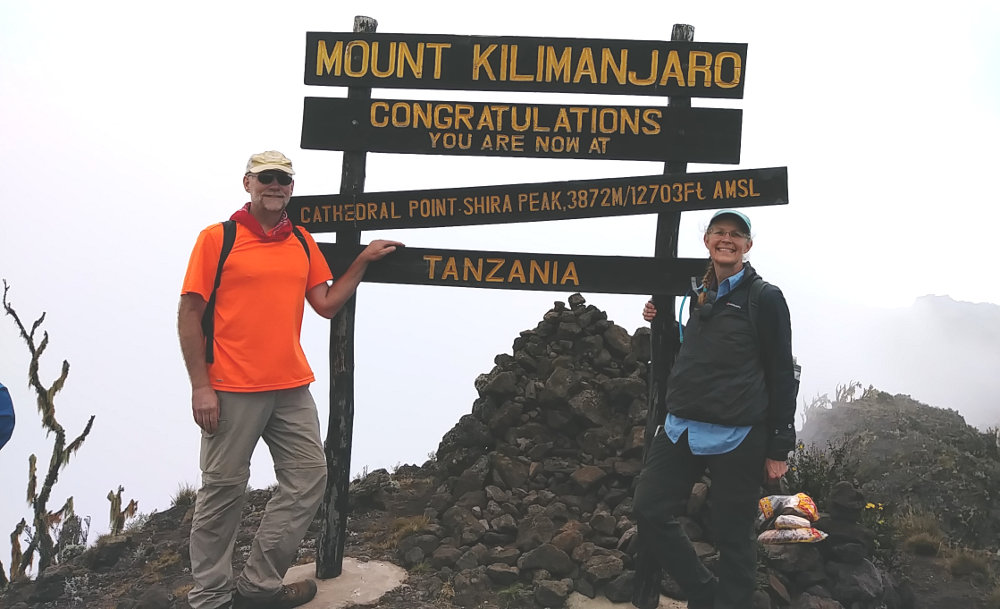 Scrambling up a couple hundred feet, we reached Cathedral Point with a sweeping view over the plateau back to our camp from this morning. On the other side of the ridge, the mountain fell away more than a thousand feet to jungle forest like we had left two days earlier. If King Kong had made an appearance, it would have fit perfectly. Misty clouds swept over the ridge, sometimes enveloping us, and then dissipating so we could see far below while we had a snack of hard-boiled eggs, mango juice, sweet rolls, and chapati (like a small tortilla).

Cathedral Point added distance to our hike, but it was one of the most interesting spots on our trek - definitely worth the extra time and effort to visit. Really, the day's hike before it was quite easy so a bit of rock scrambling was fun.

From Cathedral Point, we could see our destination for the day, but it was still a couple hours away, up the hillside. The trail took us past the end of the Shira evacuation route which was the end of the dirt road used in emergencies and included a helipad marked in rocks.
In this area, we also passed through a large rock-stacking scene. I had read that Kilimanjaro is a trash heap from the thousands of visitors, so I was expecting a mess. So far, there had been little trash, some graffiti scratched on rocks, and just a highly impacted pathway. It was much better than I had hoped for. This was the first 'Hey, Look At Me' place we'd encountered, and my Leave No Trace hackles raised a little.

Rock cairns are useful when placed to mark a trail, but some people enjoy stacking rocks for no reason except to to leave their mark. Some folks like seeing these piles, but they emphatically declare 'Kilroy Was Here' to anyone passing by and detract from the natural experience. Humans have this impulse to mark territory, and some just can't hold it in check. These stacked rocks appeared quite often along our trek up the rest of the mountain, not as markers but just scattered about around rest areas. I expect it may be due to hikers being bored with long rest breaks at these spots. 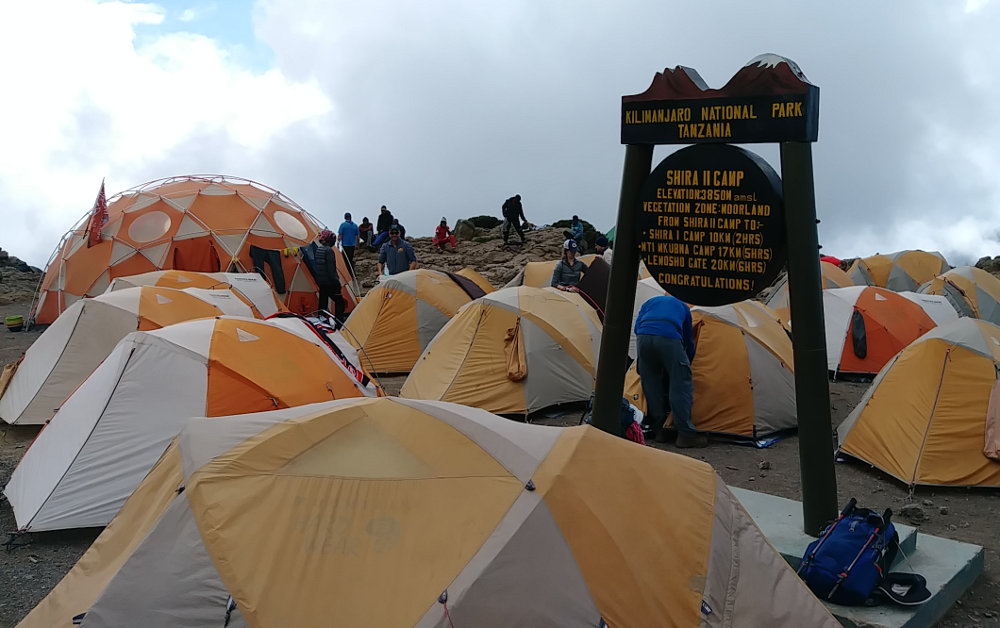 The last mile or so today was a steady climb to Shira II Camp actually on the shoulder of Mt. Kilimanjaro. There was less space here, but we still had comfortable, flat tent spots. As it turns out, one of the porters has a special job each day. He leaves early in the morning to run ahead to our next camp and stake out our territory, hopefully arriving before runners from other trek groups arrive. It seemed our runner was very good because all our sites were very good, as far as I could tell.

Now that we are higher up, the views are becoming far ranging. Besides having Kilimanjaro looming above our back, we can see across the plains far below and off to Mt. Meru to the west. With clouds staying away all day, we had a beautiful sunset almost directly behind Mt. Meru - and then the temperature dropped. Being up so high with thin, dry air, as soon as the sun set the chill set in. It was a brisk, fresh cold though, making for a great night's sleep.