When you hike out of the woods and there are no longer rooted trees and plants, it is because you are on ground that can not support life - either sand or rock. And, since sand is just rock that has been pulverized, its all rock and hiking on it safely requires special concerns to keep in mind. 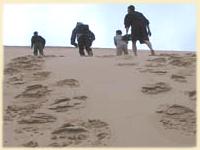 If you've ever walked on the beach, you've felt the sand give way with every step you take. When you walk on wet sand that is packed, the going is much easier than on dry, soft sand.

When the sand is piled and you are hiking up or across it, every step sinks or slips back making the going slow and more dangerous. Risks of stumbling, twisting your ankle, or causing a sandslide increase as the slope gets steeper and you get more tired. So, go slow, carefully place each step, and look for more stable ground. 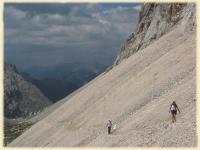 Scree is bits of broken rock piled up at the base of a cliff. In the mountains, daily heating and freezing of moisture on the solid rock causes it to slowly break the rock apart and tumble down. A scree slope will pile up to its steepest possible angle. Depending on the size and shape of the rock chunks, that angle may be shallow or steep.

Any additional rock that falls on the slope will roll down until it finds a resting place or hits the bottom. The same is true for your foot! When you step onto a slope of loose rock, just like sand, it will give way under the weight until the material under it settles with the new weight. This may be 1/32 of an inch or it may be a few inches. In some cases, you may be sliding down the slope along with a couple tons of rock, all looking for stable places to rest.

Established trails across scree tend to be packed indentations where many people have helped push the rock down a bit until there is a slightly wider path across the face of the slope. Scree trails can't have very steep inclines so they typically run straight across or a slight rise. It is very important to remain on the trail and watch your step. I'm not kidding when I say that you can find yourself 100 yards downhill with 1 to 5 pound rocks bouncing all around you from just one mis-step.

Screeing is a fun, very dangerous tactic of quickly descending a scree slope. If the scree is small enough and deep enough, you can kind of ski down it in your boots. You are actually creating a mini-rockslide and riding it down. Make sure there are no larger rocks to trip you up and no one below you. And, there's a good chance you will take a tumble, so doing it only on grape or orange sized scree rather than cantelope and watermelon sized scree is a good idea. 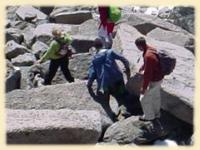 Talus is really what scree is. People just tend to call smaller bits of rock Scree and bigger stuff Talus. Really big Talus is called Boulders. It's all the stuff that has broken off of mountains and piled up. Depending on the composition of the original rock, the pieces of talus will be tiny, huge, or somewhere in between.

Don't tell anyone, but this is really my very favorite kind of hiking. It can be very dangerous and takes a lot of effort, but when things are just right, you feel just like a wild mountain goat scampering wherever you want to go. Boulder hopping is when you step or hop from one boulder to the next in a large field of talus. In good hiking boots with grippy rubber soles, on dry rocks this is fun. Instead of working your way between big rocks, you are stepping on the tops of them. Besides, I get scared when I'm standing between two big rocks - I feel like an ant between the finger and thumb of my son. :-()

After practice and you are sure of your strength, balance, and ability, you can practically dance down a boulder field. Know where you are landing and have the next couple of steps already planned ahead. I usually hop back and forth when descending a steeper field because the change in direction helps slow me down - its kind of like turning on skis to slow down.

Cautions on Rock of All Sizes

Ask Me about Dangerous Trails!
Or, read more about:

I don't know how many times I would have left grey matter on the mountain if I hadn't been wearing a climbing helmet. My rule of thumb is that I don't wear a helmet on hikes, but I do if it's a "scramble" up a mountain on which the slope angle is steep and people are using dislodging rock with their feet and hands.

Ronnette - thanks for the pointer.  I'll check the library.

Found this looking to see what terms others use for screeing. I never found screeing scary, though I guess I'd generally pick good looking slopes, and certainly keep to the gravel part. Fortunately most big scree slopes tend to have natural gradation and you can shift in or out a little as you go. I know some Nevada canyons where you can do 1,000+ foot descent in a couple enjoyable minutes. Now talus hiking... can be fun, but I always remember a slope up near Molas Pass in Silverton where we played disc golf in geology field camp, and when I wound up on a garage size boulder with a lovely flat top, except that when you walked the entire thing tilted. Feeling a rock of that many tons shift under your weight, well, that you tend to notice...

Scree is the most dangerous of all besides the avalanche. I started across a scree slope only to find that it was a thin layer on top of a solid surface. It stated to slide and I did not have footing and went down on my side. 20 feet away was a 100+ ft vertical drop onto rocks. Fortunately there was a very small tree that had established itself in the rock. I was able to reach over and grab the trunk near the base as I went past, my body swung straight down slope as I held on. The rocks I had dislodged all went over the edge. I avoid scree whenever possible

Gene Babcock: that is a wild story. Glad you're alive to spread that story.

I encounter both talus and scree regularly in Californian mountains. I usually avoid it. In many areas the talus is sort of fist-sized. I cannot make even two feet on this substrate without causing a little avalanche and sliding to the bottom. Some of our coastal trails are so worn away on both sides that you end up with a sort of narrow, pointed peak that you must walk along. Many of our trails are partly sandy as well, so they give way very easily. I've learned to be suspicious of any sloped trail portion that would take a few steps to traverse.