Giardia is a parasite that lives in the bowels of infected animals and humans. Millions of giardia are released in feces from the infected host. The giardia can survive in soil, water, food, or surfaces of items contaminated with the feces. You can become infected with giardia by:

Giardia is present in many frontcountry and backcountry waterways. You should assume that all water you find is contaminated and needs to be treated. Pictures of sipping water from a cold mountain stream look nice, but are very risky.
Visit Water Dude for lots more information about giardia and other water-borne contaminates and water treatment procedures.

Symptoms normally begin from 1 to 2 weeks after infection. The symptoms continue for 2 to 6 weeks in otherwise healthy victims. 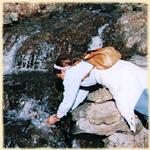 There are several prescription drugs available to treat giardia.
See your doctor if you think you may have contracted the parasite. He will probably have you submit stool samples for diagnosis.
Drink plenty of uncontaminated water to replenish that being lost through diarrhea.
Ask Me about Giardia!
Or, read more about:

How much iodine will treat mountain water against giardia?

I learned about Giardia the hard way.  It was a pain in the rear
(yea, like that) and not fun to deal with.  If there was a silver lining, it's probably that I lost 10 pounds.
Ask a Question